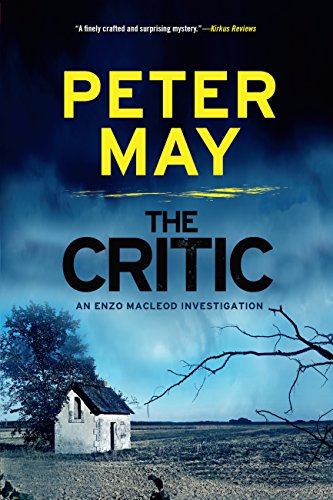 This the second book in the Peter May mystery series starring Enzo MacLeod, who debuted as a character in Extraordinary People, which I reviewed earlier. I don’t think I like this series as much as I like May’s Hebrides novels, but he’s a good storyteller, and there’s plenty to enjoy in The Critic.

The critic of the title is Gil Petty, a prestigious American wine critic who disappeared on a working trip to the vineyards of the Gaillac region in France. His fate was unknown for a couple years, until one day his body appeared staked up like a scarecrow in a vineyard at harvest time. It had clearly been preserved in wine since his death.

Our hero, Enzo MacLeod, makes Gil Petty the next challenge in his missing persons bet. A friend has written a book about unsolved disappearances in France, and Enzo has made a bet with him that he can solve several of them. Enzo is a half-Italian Scotsman, but has lived in France for years, teaching his specialty, forensic science.

Enzo moves into a small cottage near a chalet, and in semi-comic fashion nearly his whole circle of amateur assistants gather around him uninvited – his daughter and her body-builder boyfriend, his young, sexy assistant, and his on-and-off girlfriend. Another drop-in is the estranged, beautiful daughter of the late Mr. Petty, from America.

Enzo is hampered by the suspicion of some of the growers, and by constant sexual tension with almost every female (except his daughter) with whom he comes into contact. Enzo’s attractiveness to women is played mostly for laughs, and it causes him more problems than any satisfaction he gets.

But the mystery is serious, and Gil Petty is not the last victim of a ruthless serial killer.

Like all Peter May mysteries, The Critic is pretty good entertainment. Cautions for language and adult situations. There are some hints of political views, but only in passing.