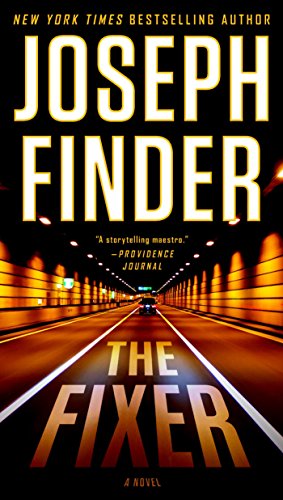 I praised Joseph Finder’s Suspicion a few reviews back, but said I wouldn’t read more from the author. That was just because I identified strongly with the hero, and the high-tension story kind of raised my blood pressure. But our commenter Paul persuaded me to try Finder’s The Fixer, and I succumbed. This one wasn’t as nerve-wracking for me, mainly because I didn’t quite believe in the protagonist. The hero of The Fixer, Rick Hoffman, was – in my opinion – kind of a moron. I mean, if I discovered a couple million in cash hidden in my father’s house, I’m pretty sure I would not try to keep it secret and hope nobody would notice. I’d go straight to the police and hope to collect some kind of finder’s fee. Because if there’s one thing I know from novels and movies, it’s that money like that has to be dirty, and dirty people will be looking for it.

Rick is a former investigative journalist who traded in his principles for a high-paying job writing puff pieces for a Boston magazine. Now the magazine is going all-online, and he’s been reduced to “contributor” status. This loses him his apartment and his fiancée. Now he’s living in his father’s unheated house, left derelict since the old man had a stroke about 20 years ago. That’s how he discovers a hidden room with a big pile of money in it. Rick has suspicions about its source, as his father used to be a “fixer,” a bag man for corrupt city politicians.

And sure enough, men start following Rick around, and he gets abducted and threatened with maiming. But that only makes him more determined to learn his father’s secrets and hold on to the money (I thought the plot lost some plausibility at that point).

The Fixer was an exciting book, but I had trouble believing it. Rick is portrayed as a very bright guy, but it seemed to me he made a lot of really stupid decisions. He also got beat up and injured a lot, without being deterred in the least.

But it was gripping, and the prose was superior. The politics leaned left, but weren’t preachy. So, recommended, with the usual grownup cautions.