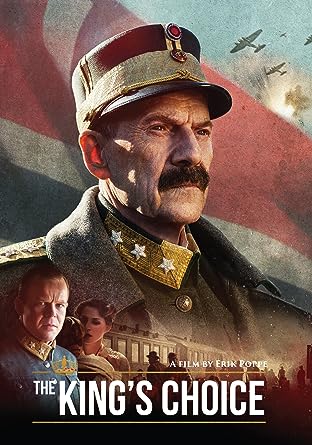 Fair warning: I’ll probably be reviewing a few more Scandinavian movies and TV shows than usual in the future. Or not; maybe I’ll get tired of them. Since I’ve become (peripherally) associated with the Norwegian film industry, I figure I ought to have some familiarity with the field.

The film The King’s Choice, released in 2016, is probably the most acclaimed recent movie out of Norway. It is not one of those that “my” company worked on, but I decided to see it, so I’d be able to discuss it at all those industry cocktail parties I expect I’ll be invited to soon.

The film concerns Norway’s King Haakon VII (played by a Danish actor, Jesper Christensen. This makes sense, as King Haakon began life as a Danish prince. I was delighted to find that I could identify his Danish accent when he spoke). When he became king of Norway in 1905, he changed his name to Haakon and his son Alexander’s to Olav, because those were the names of the last two kings of the old royal line in the 14th Century. Thus, he symbolically picked up the dynasty where it had broken off – and by and large the Norwegians loved him for it (except for a few stubborn republicans).

At the beginning of the movie, it’s 1940, and Haakon is an arthritic old man with a purely ceremonial job, mostly occupied with playing with his grandchildren. But word comes suddenly that the Germans have invaded, and he, his family, and the government flee northward, sometimes under enemy fire, beginning what will come to be a long exile. Eventually he will be approached individually by the German ambassador, and faced with a very hard decision. END_OF_DOCUMENT_TOKEN_TO_BE_REPLACED