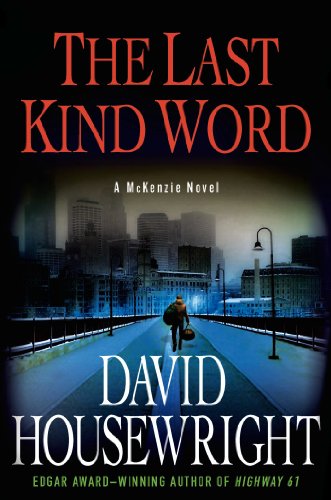 Yet it was her eyes that I found most remarkable. They were warm and wide open and so honest that meeting them made a fellow regret his long-forgotten sins.

I had a weird moment while reading The Last Kind Word, another in David Housewright’s McKenzie mystery series. It occurred to me that this was kind of like a P. G. Wodehouse novel.

Your classic Wodehouse confection involves a group of English aristocrats gathered in a country house. Their house party is intruded on by an Impostor – a guy who’s come to steal a silver cow creamer, or a manuscript, or a prize pig, or something. Humor rises through the impostor’s attempts (facile or clumsy) to put off the very reasonable suspicions of the (few) intelligent people (always women) in residence.

The Last Kind Word alters that scenario a bit – substitute a northern Minnesota fishing cabin for the stately country house. Substitute a group of lower-middle-class Minnesotans for the English gentry. And substitute our hero, Rushmore “Mac” McKenzie for the Wodehouseian impostor.

Aside from that, there are many similarities.

Federal agents have convinced Mac to help them locate some Mexicans who are selling automatic weapons connected with the Fast and Furious scandal (you may not remember it; the press sent it down the memory hole). Mac poses as a dangerous prisoner and is permitted to escape from custody, taking with him another prisoner, who has connections to the only known lead to the gun runners. END_OF_DOCUMENT_TOKEN_TO_BE_REPLACED