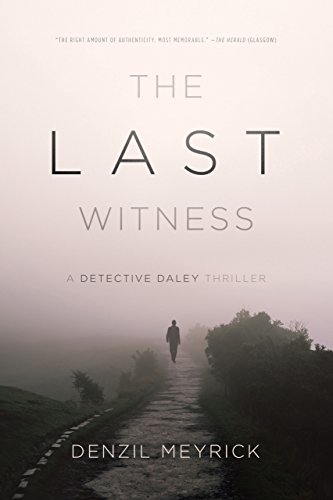 I relished the first Detective Daley mystery by Denzil Meyrick, Whisky from Small Glasses, which I reviewed not far south of this post. I got just as much pleasure from the second book in the series, The Last Witness.

This outing finds DCI Jim Daley relocated from Glasgow to the location of the first novel, the fictional town of Kinloch on the Kintyre peninsula. He’s grown to like the town and its easy sense of community. Even his marriage seems to be improving.

Meanwhile, in Australia, a former criminal now in the British equivalent of witness protection is brutally murdered, along with his wife. What raises red flags in Glasgow is that the killer’s face is clearly seen on closed circuit TV – and he is plainly a man who’s supposed to be dead. James Machie was the godfather of Glasgow organized crime, and the dead man had testified against him, before Machie was sentenced to prison and then murdered.

Another witness, also under protection, lives near Kinloch. On top of that, Daley’s friend and subordinate, DS Scott, participated in Machie’s arrest – and Machie vowed vengeance on him as well.

People are going to die, seemingly murdered by a ghost, and a network of lies and betrayals will be brought to light. The Last Witness works up to a thundering climax at sea, and when you think all the mysteries have been solved, new twists appear.

Above the basic plot, an overarching meta-plot is winding its way through these stories. I’m eager to learn what comes next. Cautions for language and mature themes. Christianity, though not a major element in the book, seems to be handled with respect.