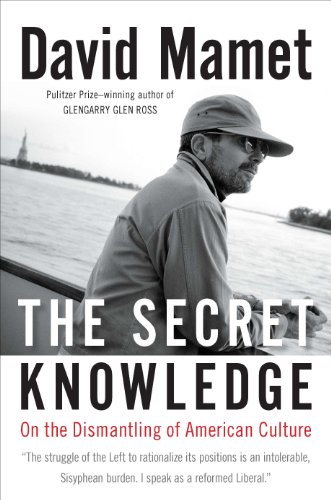 David Mamet is, of course, one of America’s foremost dramatists. He was highly respected by critics until he came out as a conservative a few years back. Since then many have discovered that he has no talent at all.

Still, he perseveres, and he has written a book about Politics, The Secret Knowledge, to explain how his mind has changed on a number of issues and to provide a few glimpses into his personal pilgrimage. I don’t agree with all his opinions, but the book was fascinating to read.

The title is paradoxical. There is no secret knowledge, Mamet informs us. The basic truths of life are widely known by all people, even (or especially) the extremely unsophisticated. It is the intellectuals and the avant garde who reject obvious truth and embrace nonsense, to which they cling desperately, because their adherence marks them as among the Enlightened.

Any review is likely to devolve into commentary on Mamet’s actual beliefs, either approving or condemning them. So I’ll content myself with providing a few choice quotes – of which there are many. I think I may have highlighted about a third of the text.

Writers are asked, “how could you know so much about (fill in the profession)?” The answer, if the writing satisfies, is that one makes it up. And the job, my job, as a dramatist, was not to write accurately, but to write persuasively. If and when I do my job well, subsequent cowboys, as it were, will talk like me.

END_OF_DOCUMENT_TOKEN_TO_BE_REPLACED

David Mamet, “America’s most famous and successful playwright,” has rejected the political liberalism of his past, perhaps in an effort to avoid unpleasant New York cocktail parties. In the current Commentary magazine, Terry Teachout describes the playwright’s conversion as revealed in print.