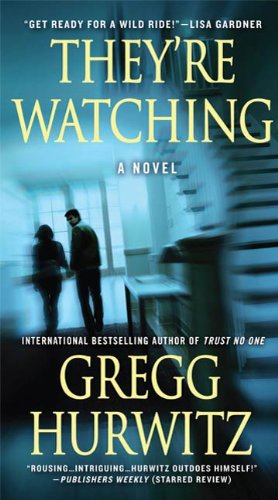 A sometime model from Bulgaria, she had a knee-weakening accent and natural eyelashes longer than most Hollywood prenups.

Patrick Davis briefly realized his dream of becoming a Hollywood screenwriter. He saw his script turned into a major picture. Then one day, on the set, he managed to sabotage his career, and shortly thereafter his marriage began to fall apart. Now he’s sleeping on the couch, contemplating a separation, and has taken a job teaching college-level writing. He feels pretty bad, but it’s about to get worse.

At the beginning of They’re Watching (by Gregg Hurwitz) Patrick brings in the morning paper one day to find an unlabeled DVD inside it. The video on the disc demonstrates that someone has been watching and filming him – even coming inside his house. After a couple more DVDs are delivered – and the police say they can’t help – he starts getting demands that he carry out certain tasks.

The odd thing is that they’re nice tasks.

But what follows is not nice at all. Soon Patrick is the chief suspect in a headline homicide, facing the prospect of conviction and execution. All indications say that the people manipulating him are powerful on a world-class scale, and have resources neither he nor the police (even if they believed him) can match.

I think They’re Watching is one of Gregg Hurwitz’s earlier books, and it seemed to me he hadn’t quite mastered the “start with an earthquake and then escalate” style his most recent books demonstrate when he wrote it. And frankly I liked that. The more leisurely beginning was easier for me to handle. But the stakes got high quickly enough, and I was riveted (despite the highly improbable plot – but after all they’re all highly improbable). It’s the kind of book designed to be made into a Mark Wahlberg movie with loads of choppy action and chase scenes. Lots of fun.

Cautions for language, violence, and adult themes, as you’d expect. Recommended for its proper audience.