We usually specialize in Vikings on this blog, but we are not above tolerating Anglo-Saxons, especially when there’s a Tolkien connection.

Tom Shippey, successor to and biographer of J.R.R. Tolkien, has a review in the London Review and Books of a new book on the Staffordshire Hoard, a rather amazing 2009 find:

What one can say is, first, that the hoard is unique from the period. Previous discoveries have been grave burials, or single finds, not collections buried with (presumably) the intention of later recovery. Second, the general nature of the hoard is clear. It is strongly weapon-related, but without weapons. There are no coins, no brooches, no items of women’s jewellery, not even a single knife or sword blade. Some 80 per cent of the objects are fittings from weapons, mostly sword-hilt parts. An Anglo-Saxon sword typically had a wooden hilt fitted over the iron tang on the blade, but to this were added an upper and a lower guard, each secured by two hilt plates and a hilt collar, fixed by bosses, with a pommel on top. All these appear in the hoard in large numbers.

Read it all here. Thanks to Dale Nelson for sending me the link. 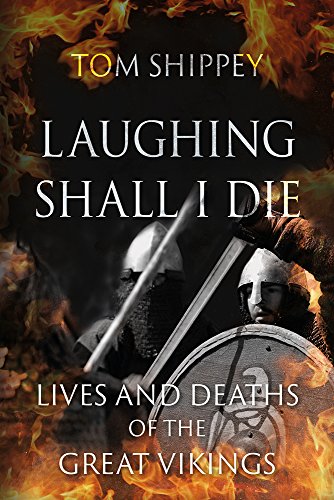 And what this means for us is that if you come across headlines – as these days you very often do – which say something like ‘Vikings! Not just raiders and looters any more!’ then the headlines are wrong. If people weren’t raiding and looting (and land-grabbing, and collecting protection money), then they had stopped being Vikings. They were just Scandinavians.

The trouble with reading a book that really excites you is that you end up highlighting passage after passage. Then it’s hard to pick one out to put at the head of a review. I finally chose one from near the beginning, but there were many others.

I’ve posted an excerpt previously, because I did find Laughing Shall I Die: Lives and Deaths of the Great Vikings, by Tom Shippey an intriguing and exciting book in my favorite historical field. It’s been a long time since I’ve read one more intriguing. I don’t necessarily agree with all of it. In some ways Shippey’s thesis supports “my” work (Viking Legacy, which I translated), in some ways it contradicts it. I have praised Anders Winroth in a previous review (though disagreeing with him at many points). Shippey essentially discards Winroth as one who misses the whole point.

The point being that the word “Viking” is routinely misused in our day. “Viking” means a seaborne warrior – a pirate. If you write about early Medieval Scandinavians in all walks of life and re-label them Vikings, you’re confusing the matter.

To put it bluntly (again), most scholarly books with ‘Viking’ in the title turn out not to be about Vikings, because Vikings aren’t popular among scholars. This book is different: it really is about Vikings.

END_OF_DOCUMENT_TOKEN_TO_BE_REPLACED

My friend Dale Nelson suggested I read Tom Shippey’s Laughing Shall I Die, a book on the Viking Age focusing on its warrior ethos. This isn’t a review, because I’m still reading the book. It’s quite long. But I’m finding it immensely congenial, a book that reinforces my prejudices – and who doesn’t enjoy that? Broadly speaking, it’s a sort of a backlash book against the prevailing consensus in Viking studies, the one that says, “The Vikings were really pretty much like everybody else. They just got bad press because their enemies wrote the history books.” I must admit I’ve said the same sort of thing, especially at reenactment events, but I’ve always held secret reservations.

Shippey (a Tolkien biographer and “the Professor’s” successor at Oxford) says phooey to all that. The Vikings, he says, were masters of violence and of psychological warfare. They won by intimidation, and through belief in something like a death cult. Here’s what he says about the political upheavals that wracked Scandinavia in the time of Beowulf:

Using modern terms, the story is one of centralizing power, professionalization of the military, disappearance of local groups and tribal names, and wars – so Hedeager suggests – to control strategic resources including land and access to bog iron.

The last is a modern view, by a modern scholar who characteristically prefers sensible economic motives for war. Our ancient texts, like Beowulf and Hrolf’s saga, suggest just as plausibly that the wars were undertaken for glory, for revenge, to expand power.