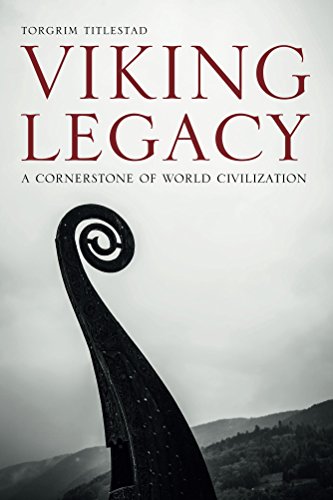 If you’ve been waiting for a Kindle version of Viking Legacy (have I mentioned I translated it?), it’s available now. $9.99 is your price. Tell ’em Brandywine Books sent you.

I have another article in The American Spectator today. I was nervous about writing about Viking Legacy, the book I translated, but editor Wlady Pleszczynski took pity and me and stretched a point.

In time I was delighted to discover a Norwegian historian whose thinking ran very much along the same lines — Professor Torgrim Titlestad, now retired, but then on the faculty of the University of Stavanger. A local historian in Stavanger put me in contact with him, which led eventually to his hiring me to translate his Norwegian book, Norge i Vikingtid (Norway in the Viking Age)…

I heard from Prof. Titlestad’s son, who liked the article, but gave me an additional piece of information I wish I’d known. Prof. Titlestad didn’t retire from the University of Stavanger. He resigned in protest against changes made in the history curriculum. He now works full time with The Saga Heritage Foundation, which he founded to combat the current rush toward historical amnesia.

Today I got my complimentary copies of Viking Legacy, the book I translated.

It’s always a strange and wondrous thing to finally handle a book you’ve only known in the abstract up till now. I’m not the author this time (in fact there are bits I don’t entirely agree with). But I worked long and hard on it, and did a lot of polishing. The translation still looks a little rough to me, especially at the very beginning, the worst place for it. The body of the text looks much better though. I like to think the “flaws” are the fault of the editors, but I’m not entirely sure of that.

Anyway, it’s grown up and left the nest now, and I look at it, not as a father but as a sort of uncle, I suppose. I hope it does well in the wide world.

In point of fact, this is an important, groundbreaking book. If it finds its audience it will be controversial.

Buy it now and see why!

I’ve been telling you about this book for — it seems — about half my life. (Actually it’s two or three years. Maybe four). But it’s here at last — Viking Legacy, by Torgrim Titlestad. Translated by your humble servant.

The book has two main themes — one, that Viking democratic traditions of governance were influential in European history. And two, that the Icelandic sagas, while not inerrant, do provide useful information which, coordinated with other historical research, can shed light on the political history of Scandinavia.

A page from the Flatey Book.

Therefore your end is on you,
Is on you and your kings,
Not for a fire in Ely fen,
Not that your gods are nine or ten,
But because it is only Christian men
Guard even heathen things.
–G. K. Chesterton, “The Ballad of the White Horse”

It’s pretty well known that Norse mythology is far better preserved than any other European pre-Christian mythology. This is largely because the great saga-writer and poet Snorri Sturlusson, a Christian, persuaded Icelandic churchmen that the old Norse Eddaic poetry was worth preserving, and that a knowledge of the old myths was necessary to preserve it.

In my translation work on the brochure I’m doing for the Flatey Book publication project, I learned about a further debt that Icelandic culture (including modern, reconstituted heathen culture) owes to the church.

Here’s an excerpt from Prof. Titlestad’s essay in the brochure:

In the farthest north of Iceland, at Hólar in Skagafjord, dwelt the mathematician, cartographer, culture-builder and bishop Guðbrandur Þorlaksson (1541-1627). He was the first to draw a good map of Iceland. He had a printing press at his disposal and published/edited 80 books. A graduate of the University of Copenhagen, he was the first to publish extracts of the Bible in Icelandic. In this way he established a more secure basis for a national language than Norwegians possessed – they had to get along for centuries in Danish.

It’s often stated that modern Icelandic is the same language spoken by the Vikings. That’s only approximately true — the language has changed a little. But it’s close enough for general purposes. If Jarl Haakon, who time-travels to the 21st Century in my novel Death’s Doors, showed up instead in Reykjavik, he’d get along fine making himself understood.

But the reason that old language was preserved in its early form, as we see above, is because a Christian bishop wanted to have portions of the Bible printed in Icelandic.

I hope I’m not out of line quoting a paragraph from my own translation, in progress, of a promotional booklet for the Norwegian Flatøy Book project. This passage discusses the decision of the Icelandic bishop Brynjolv Sveinsson to turn the big manuscript (two volumes) over to King Fredrik III of Denmark in 1556. The original author is Prof. Torgrim Titlestad:

Brynjolv built on insight that had been developed within the Icelandic culture ever since Arngrimur’s pioneering work in the 16th Century, but he was possibly more aware than the others of the unique civilization-building impulses contained within the Norse heritage, as especially expressed in Flatøybok. Flatøybok can be understood as a kind of “Noah’s Ark” of ideas, stocked with the fundamental concepts of the Norse world in order to survive as a time capsule in a threatening future. This distinguished Flatøybok from older saga literature. The book was a “generational ship,” laden with the experiences of many people over many generations. The Norse culture had grown up outside the sphere of Roman dominion, and thus was different from European feudal culture with its comprehensive, hierarchical class structure. The Icelandic author Bergsveinn Birgisson (1971-) has expressed himself on the message of these medieval authors to the world (2015): “We had our own unique culture up here in the North, with a value of its own, which we desire to preserve for future generations.” And as his spiritual ancestor Brynjolv might have said, “And we would wish that the world would learn from it.” Brynjolv desired to send this “ark” to Copenhagen so that the book might be published and made available to European readers. Flatøybok was meant to sail out into diverse intellectual harbors and then cast off again for further voyages around the world.

But, while all of these [various morally relative assessments of the Viking Age] are entirely valid perspectives, the pendulum may have swung too far: as one modern historian puts it, the revisionist view has come close to giving us an image of the Vikings as a group of ‘long-haired tourists who roughed up the locals a bit.’ Among the aims of this book is to restore the violence to the Viking Age, and to try to show why our understanding is incomplete without it.

I’ve already referred to Robert Ferguson’s The Vikings: A History twice on this blog, here and here, having found it an informative and instructive book. If I’d been disappointed or offended, I’d have more to say. As it is, I’ll offer a short review of quite a good general history of the Viking Age.

Why a new history of the Vikings? Because we keep learning stuff. You’ve got to run to keep pace with our knowledge of the early middle ages nowadays. People like me, especially, who take it upon ourselves to lecture on the subject, need to take the initiative to keep our reading up. I thought what I learned about the Oseberg ship, linked above, was worth the price in itself.

Author Ferguson makes the considerable contribution of including something I’ve written about here before, and which was perhaps introduced in English-language history books by my friend Prof. Torgrim Titlestad, in a work that didn’t get the attention it should have – the new (actually old) theory that the Viking raids were initially sparked by Charlemagne’s brutalities against the Saxons. Having shared that useful idea, Ferguson does little more with it, which I think is appropriate. It seems to me that, even if the original spark was religious, the Viking raids continued for plain reasons of profit. There are no images of peace-loving, put-upon Viking victims here, and that suits me just fine.

Ferguson spends what seems to me adequate time, within the limits of a single (if long) volume, following the activities of the Norse through all their major fields of activity around the world, and through the three centuries of that activity. I caught one or two small errors of fact, ones I knew to be fact, but that’s inevitable in a work of this scope.

Highly recommended for all who are interested in the subject, and especially for curious newcomers.

I don’t generally do long posts while out of town, especially on weekends. But I think the best way to deliver my report on the International Vinland Seminar today is to write up a summary while my memory’s fresh.

We met at North Park University in Chicago, a school with Swedish roots that I wasn’t familiar with. It reminds me a little of my alma mater, Augsburg College in Minneapolis, in that it’s set (I suspect the admissions brochures say “nestled”) in an urban neighborhood. Nice place, though.

We met in a lecture hall called Hamming Hall, and I got permission to set up my book table. I was in the back of the room, but it gave me a good view, so I just stayed there through the entire event, selling my books during breaks. END_OF_DOCUMENT_TOKEN_TO_BE_REPLACED