While still I may, I write for you
The love I lived, the dream I knew.
From our birthday, until we die,
Is but the winking of an eye

W.B. Yeats wrote fondly of his native Ireland and the pagan faerie roots he supposed it has. These lines from his poem, “To Ireland in the Coming Times,” published in 1893. Composer Thomas LaVoy arranged the last stanza into this choral piece, performed by The Same Stream.

I cast my heart into my rhymes,
That you, in the dim coming times,
May know how my heart went with them. 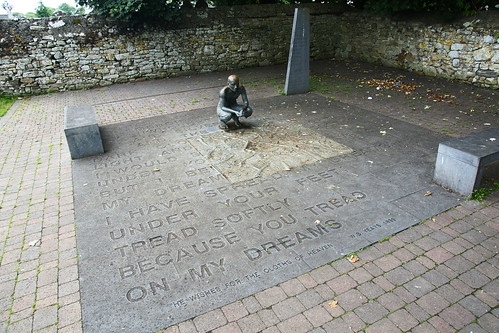 June 13 will mark the 150th anniversary of the birth of William Bulter Yeats.

“a tale that she
Told of a harsh reproof, or trivial event
That changed some childish day to tragedy”

The Irish Times has several articles and personal reflections to commemorate the day. They say he published with them, being “a prolific journalist, contributing to dozens of newspapers, magazines and periodicals on matters of both politics and poetry, although for the budding writer the two were indivisible. The young idealist may have had loftier aspirations than the industry he later decried as ‘jeering, tittering, emptiness,’ but it was a good and important beginning for him: a way to augment his meagre living and increase his profile for his poetry.”