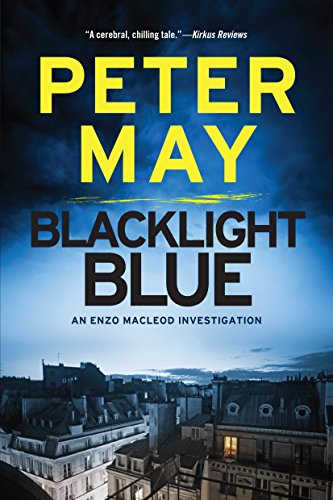 I kind of cooled to Peter May’s Enzo Macleod mystery series after the last volume I reviewed. But I picked the thread up again with Blacklight Blue. I’m pleased to report that some of the quirks that annoyed me in previous books have been moderated, and I enjoyed the book well enough.

This time out, Enzo has just gotten a diagnosis of terminal cancer from a doctor, when (in short succession) one of his daughters is nearly killed by a bomb, his other daughter’s boyfriend’s business is burned down, and all his credit cards are stopped.

It all seems to relate to the latest in his cold case investigations. A former forensic scientist, Enzo has made it his crusade, based on a bet, to clear up a number of unsolved French murders (though Scottish-Italian, Enzo lives in Paris). His investigation of the murder of a “rent boy” takes him (along with his usual entourage – his daughters, their boyfriends, and his female assistant) to the Auvergne region of France, where he faces a relentless enemy and a deadly confrontation on a mountainside.

I was pleased that the earlier, half-comic theme of Enzo’s devastating attractiveness to every women he meets has been downplayed. This time out he limits himself to a sympathetic female ski instructor who provides his party with a convenient hideout.

My enjoyment of these books is reduced by the fact that I don’t actually find Enzo a very appealing character. Yet I keep reading the books, so it can’t be that bad. Peter May is a good writer.

Recommended. Cautions for the usual stuff.