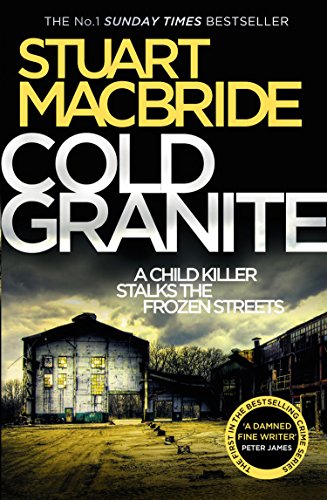 Behind the approaching van the North Sea raged, grey and huge, the frigid wind making its first landfall since the Norwegian fjords.

I like to tell you right off when I think a book is well done. Cold Granite, by Stuart MacBride, is an extremely well done mystery/thriller, a book that handles a troubling subject about as well as any writer could.

Detective Sergeant Logan McRae has been nicknamed “Lazarus” by his fellow officers. It’s his first day back on the job, after a long convalescence from knife wounds received from a serial killer. He’s hoping to take it easy for the first few weeks, as he still feels some pain.

No hope of that. The first day a three-year-old boy is found murdered and mutilated in a flooded ditch. Soon other children go missing – or are discovered dead. Long hours will be required, in the extremely unpleasant weather of Aberdeen, Scotland in December (the rotten weather is a major character in t this book). Logan will have to deal with sniping associates, demanding (or lazy) superiors, maddening defense attorneys, and persistent news reporters (one of whom attaches himself to Logan as his special project). Apparent connections between murders prove illusory, while apparently separate murders turn out to be linked. It’s one step forward, two steps back all the way to a pretty cinematic climax.

The writing is top-notch, vivid and epigrammatic. The characters of Logan, his fellow officers, and a variety of scaly suspects are well drawn. What particularly impressed me about the story is the way author MacBride conveys the frustrations of the work of policing – I began to wonder why anyone puts up with it. There is no attempt to soften the horrific suffering and deep grief involved in the crimes, but he makes it endurable through a kind of slapstick – Logan’s many frustrations, disappointments, and injuries are not laughable, but they’re presented in a way that lightens the mood and keeps the whole effort from being too much for the reader to bear.

I very much enjoyed Cold Granite, and look forward to reading further Logan McRae mysteries. Many cautions are in order – language, sexual themes, and very disturbing crimes against children.