On a country road near Dublin, a wealthy property developer is found dead in a crashed car. It wasn’t the crash that killed him.

Not far away, in a shed in the woods, a young man is found naked and stabbed to death.

Detectives Aidan Burke and Fiona Moore are on the case. The books at the older victim’s office look fishy, and his company’s labor force seems dodgy. But his family situation was odd as well. No lack of motives here, but lots and lots of secrets.

That’s the premise of David Pearson’s A Fatal Liaison, second in his Burke and Moore mystery series. I’ve reviewed the previous volume before, and this one completes the series to date. No doubt there will be more, because these books work pretty well.

As a Typical Male ™, I assumed at first that Aidan Burke, the senior detective, was the main character. But he’s really not. Aidan is smart enough and knows his job, but he has a drinking problem and has lost a step or two. He doesn’t treat Fiona badly, according to his somewhat Neanderthal lights, but his younger sergeant is actually smarter than he is. More than once she suggests a line of inquiry that he barely notices, which turns out vital once she’s followed it up.

A Fatal Liaison is a solid entry in a solid series. It’s not one of my personal favorites, but I have no cause to complain. Cautions for language and mature subject matter. Also implied criticism of traditional Christian morality.

In the classic model of the Anglo-Irish police story, you’ve got your grizzled male Detective Inspector, supported by a younger female detective. What makes this series somewhat different is that the older male detective is not always on top of his game, and his assistant (who does not look like a model) has to save him from himself from time to time.

In A Deadly Dividend, a young banker is stabbed to death in an alleyway. When Detectives Aidan Burke and DS Fiona Moore inquire at his bank, it becomes apparent that the victim has been fiddling with his international accounts. It turns out he has had a clandestine dealings with shady interests. When another murder follows, they need to move fast – if Fiona can keep Aidan sober long enough to get the job done.

I quite enjoyed A Deadly Dividend. It definitely leaned more to the mystery than the thriller side, and dealt realistically with the plain drudgery that police work involves. And the fact that Aidan has a drinking problem and makes serious job mistakes – which Fiona must cover for – makes them an unusual fictional team. I also liked occasional suggestions of non-PC opinions.

There’s only one more book in the series to date, but I’m planning to read it. 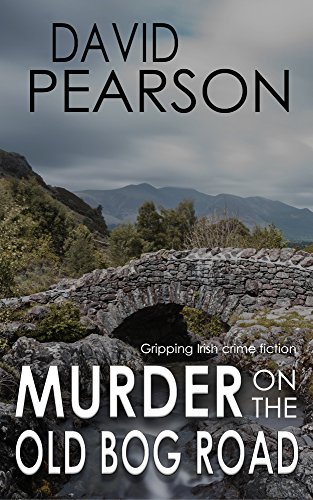 It’s storming along the Old Bog Road in Clifden, Galway, Ireland. A woman has to stop her car before passing over a bridge, because it’s been damaged and there are stones strewn about. As she clears the stones, she sees a woman in a red coat, lying drowned in a ditch. She calls the Garda, who are baffled when they find that the woman has no identification. It’s clearly murder – someone hit her in the head with something hard.

Inspector Mick Hays and Detective Sergeant Maureen Lyons lead the investigation. Gradually they learn that the woman was a Polish “sex worker,” and there are a number of men – some of them influential – who do not wish their relationships with her to be made public.

Murder on the Old Bog Road, by David Pearson, is clearly intended to take advantage of the current popularity of “Celtic” police procedural mysteries. This is a genre I enjoy, when it’s done well. It offers mystery and atmosphere. However, I did not find this book a successful entry in that field.

The writing was pedestrian at best, and sometimes clumsy. The characters seemed shallow to me. The two leads, Hays and Lyons, ease into a sexual relationship in a way that seemed unrealistic – Hays makes inappropriate jokes without Lyons taking any offense, and they are not at all bothered by the professional impropriety of their relationship.

On top of that, author Pearson makes one repeated writing mistake that annoyed me very much (though it could be the editor’s fault). The accepted rule when writing fiction is that if a character gives a long speech, which is broken up by paragraphs, you leave the closing quotation marks off the end of the first paragraph, giving the reader notice that the speech is not finished. If the quotation mark is there at the end, the reader assumes the next paragraph is being spoken by another character.

Pearson breaks this rule all the time, making his dialogue sections extremely hard to follow.

I found Murder on the Old Bog Road unpolished and unsatisfying. Maybe the series will get better, but I won’t be reading the next book for now.