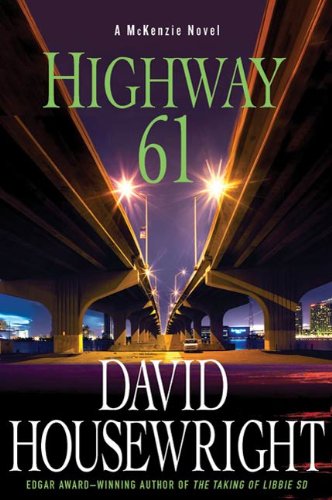 The saga of Rushmore “Mac” McKenzie continues with Highway 61. The title of the book refers to a semi-famous road going north out of the Twin Cities (it goes south too, but nobody cares). Did Bob Dylan write a song about it? I don’t know; I take pride in my ignorance of Bob Dylan.

Anyway, as you know by now, Mac McKenzie is a former cop, now a millionaire. For his own satisfaction, he does unlicensed private eye work as “favors for friends.” Jason Truhler is definitely not one of those. He’s the ex-husband of Mac’s girlfriend Nina, and he treated her so badly as to put her off marriage for life (or so she claims). But their daughter Ericka is a friend of Mac’s, and she begs him to help her dad.

So Mac talks to Jason, who says he was set up. He went up to a jazz festival in Thunder Bay, met a girl, got drugged, and woke up in what I’ll call here, for purposes of suspense, a “compromising situation.” Now somebody’s blackmailing him with a photograph, and he says he can’t afford it anymore. If the blackmailers release the photo, it will devastate Nina and Ericka, two people Mac loves. So he agrees – reluctantly – to look into it.

About the first thing Mac learns is – surprise! – that Jason didn’t tell him the whole truth. Further investigation leads to an extensive prostitution ring, with ties to Minnesota’s rich and powerful. People get killed, of course.

Highway 61 is a solid private eye novel, featuring an intriguing hero and a fun cast of characters. I enjoyed it. Cautions for the usual.