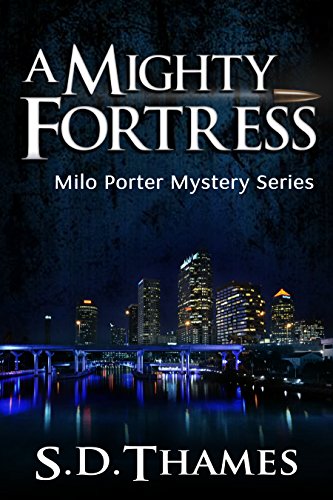 [Cue sound effect: Ringing bell.] We have a winner! From a quarter where I wouldn’t have expected to find one! A Mighty Fortress is a first (full-length) novel by an author I’d never heard of. It has so much going against it – it’s a Christian novel (which usually means low quality, let’s face it, especially when the authors are starting out). It’s a hard-boiled mystery into which the author injects supernatural and theological elements. There are even miracles. The miracle for me is how well this thing worked, and how much I loved it.

Milo Porter is a Gulf War veteran suffering from PTSD. He makes his living as a private investigator and process server, working for lawyers in the Tampa area. When not working, he lets off steam doing power lifting at a gym owned by a friend, whose sister is Milo’s girlfriend. He sees a counselor for his insomnia and flashback dreams, but what he really enjoys is taking risks.

One Sunday he’s offered an unreasonable sum to do a special subpoena service on a guy connected to the mob. He figures a way to accomplish this and get out safely, but he still gets ambushed and kidnapped by the target and his henchmen later that night. But that’s the best part, as far as Milo’s concerned. By the end of the night somebody has been murdered.

Milo is compelled to get involved in the investigation, trying to locate a beautiful prostitute whose life is in danger. He encounters crooked politicians, crooked cops, pornographers, an alcoholic ex-judge, a preacher who’s lost his faith, and – a supernatural being. And that’s only the beginning of the weirdness.

The wonderful thing is that author S. D. Thames makes the whole thing work. His prose isn’t fancy, but it’s solid and compelling, highly professional in quality. The characters are interesting, and they often surprise us. Milo himself is a fascinating study.

I found A Mighty Fortress a delight, a little reminiscent of John D. MacDonald in style. I’m reading a previous novella by the author now, and look forward to more Milo Porter books when they come out. Well done. Not for the kids, but for anyone else, I highly recommend it.