Today is St. Lucia Day. The Lucia Fest is most often associated with Sweden, but they do it some places in Norway too.

It was one of the most exhausting weekends I’ve had in a long time, involving considerable interaction with other human beings, always a workout for me. But nevertheless it wasn’t a bad weekend. Two things that happened, in particular, pleased me inordinately. 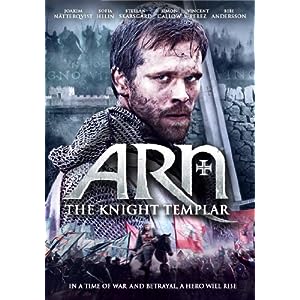 Who’d have imagined that the best knights and armor movie since Braveheart (discounting The Lord of the Rings trilogy, a fantasy) would come out of Sweden, of all places?

Arn: The Knight Templar (available on DVD and Blue Ray) is an adaptation (much truncated, I understand) of a Swedish television miniseries based on a trilogy of novels by Jan Guillou. The hero is Arn Magnusson (Joakim Nätterkvist), a young man who was raised in a monastery, but trained in arms by a monk who was once a Knight Templar. Returning to his family, he falls in love with a neighbor’s daughter, Cecilia (Sofia Helin). Unfortunately her father’s political obligations make their match impossible. But the two young people manage to get together long enough to conceive a child. The ensuing scandal results in her being confined to a nunnery, and him being sent to join the Knights Templar on crusade in the Holy Land.

The storytelling requirements of fitting all this into the 133 minute run time make for a lot of intercutting and flashbacks (you do have to pay attention), but we follow their separate trials and and struggles for the next twenty years. The focus is on Arn, who becomes a legendary fighter in the Holy Land, one whom the Muslim armies recognize, fear, and respect. He even becomes a friend of Saladin, a circumstance which saves his life (what would fictional crusaders ever do without Saladin to pull their escutcheons out of the fire?). After their time of punishment is complete, Arn and Cecilia are reunited and married, but one final challenge remains for his warrior skills. END_OF_DOCUMENT_TOKEN_TO_BE_REPLACED

I don’t generally do long posts while out of town, especially on weekends. But I think the best way to deliver my report on the International Vinland Seminar today is to write up a summary while my memory’s fresh.

We met at North Park University in Chicago, a school with Swedish roots that I wasn’t familiar with. It reminds me a little of my alma mater, Augsburg College in Minneapolis, in that it’s set (I suspect the admissions brochures say “nestled”) in an urban neighborhood. Nice place, though.

We met in a lecture hall called Hamming Hall, and I got permission to set up my book table. I was in the back of the room, but it gave me a good view, so I just stayed there through the entire event, selling my books during breaks. END_OF_DOCUMENT_TOKEN_TO_BE_REPLACED