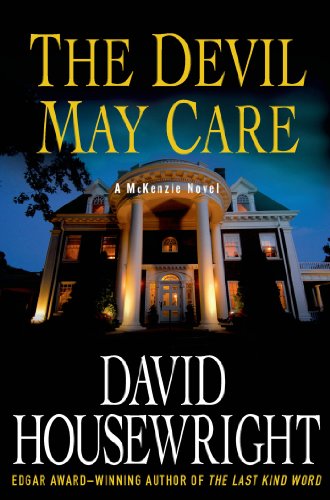 The receptionist at the Lake Minnetonka Community Bank had green eyes that glowed like the numbers on an ancient calculator, the kind you used to be able to buy at Radio Shack.

A continuing character in David Housewright’s series of McKenzie mysteries is old Mr. Walter Meulenhaus, sometime ally, sometime enemy, sometime client of our hero, millionaire detective Rushmore “Mac” McKenzie. Mr. Meulenhaus, we are informed, is the eminence gris of Minnesota politics, the string-puller behind the scenes who makes everything happen in our state. Which has to be a joke, because we’re told he’s a Republican and there hasn’t been a Republican in a state office for some time now.

Anyway, in The Devil May Care, Mac is approached, not by the old man, but by his granddaughter, Riley Bodin. She has fallen in love – against her family’s wishes – with the son of a prominent Spanish family, Juan Carlos Navarre. Partly because he likes Riley, and partly just to twist Mr. Meulenhaus’s shorts, Mac agrees to help her.

And before long there’s murder and arson, and gang war, and federal investigators, and Riley herself in mortal danger. Turns out Juan Carlos was not who he said he was, and not who he’d claimed to be before that, either.

The Devil May Care is enjoyable and well-written, like all the other books in the series. I think author Householder can lay off the lesbian characters for a while now, though. He must have filled his quota to satisfy whatever PC regulation he’s trying fulfill.