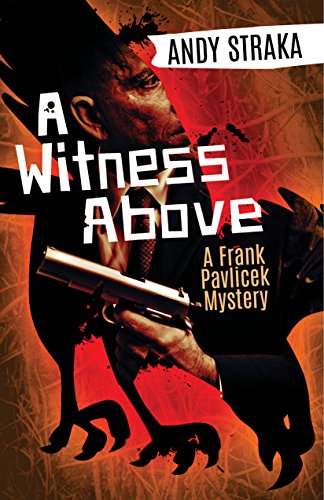 …and for the first time I may have caught a glimpse of grace from a higher station, where eyes see earth more clearly and the hunter waits, her quarry known.

The first book of a detective series, Andy Straka’s A Witness Above is a competent hard-boiled story with interesting spiritual elements. The hero is Frank Pavlicek, a former New York City detective. After he and his partner, Jake Toronto, killed a young black man (with an apparently blameless record), they were kicked off the force. They moved south to the Charlottesville, Virginia area, where they keep in touch with another officer also involved in the fateful shooting. They operate as private detectives, and in their spare time they train hunting falcons (I don’t think any literary detective has ever done that before).

One day, out training his hawk, Frank discovers the body of a young black man, killed by a gunshot. He keeps some things back from the police when he calls it in, though, because this young man was known to his daughter, who has recently come to live with him after his ex-wife’s permanent hospitalization. Both the police and the FBI suspect Frank, but he’s determined to discover the truth while protecting his daughter, even at the cost of his life.

This was a pretty good book. I wouldn’t rank it at the very top of the hard-boiled heap, mostly because I found Frank a little flat as a character. He never really came into focus for me. But the story was fascinating, the suspense honest. The writing was excellent. And the Christian characters in A Witness Above (there are several) are authentically and sympathetically drawn. (You won’t find characters like this in a Lee Child book.)

Mild cautions for language, but all in all I’m fairly confident in giving A Witness Above a B+, and recommending it to you.

One thought on “‘A Witness Above,’ by Andy Straka”