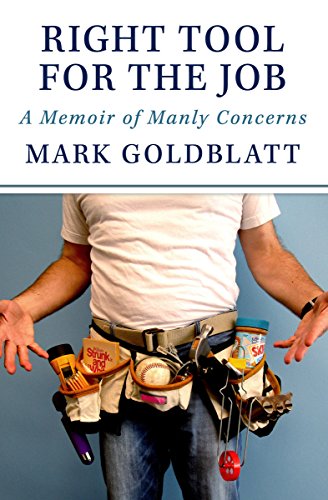 The headphones jerked out of my ears, and I made a grab for them, which caused me to trip over my feet, fall onto my side, and shoot off the back of the treadmill, knocking over two young women in spandex outfits who’d been chatting behind me. As one witness said, it looked like I was picking up a six-ten spare.

Yes, I’m blogging through The Lord of the Rings, and I’ll be back with that momentarily. But my Facebook friend Mark Goldblatt announced a deal on his book Right Tool for the Job: A Memoir of Manly Concerns, and I figured it wouldn’t do me any serious harm to take a break between hobbits with a short, light book. I did, and it didn’t.

Right Tool for the Job is a collection of humorous essays, sort of an autobiography under strobe light. We begin with an awkward memory of Mark’s father taking him to a Turkish bath, and end with a meditation on giving up softball because your body’s just getting too old for the punishment. A recurring theme seems to be the unlimited indignities men’s bodies impose on them, with particular emphasis on sexual awkwardness, though all the stories aren’t about sex, and honestly, what else is a guy going to write about?

Author Goldblatt is Jewish, secular, and conservative. He’s also extremely funny. I laughed out loud more than once. I recommend The Right Tool for the Job, with cautions for mature themes. I especially recommend it to women, as an introduction to what’s laughingly known as male psychology.