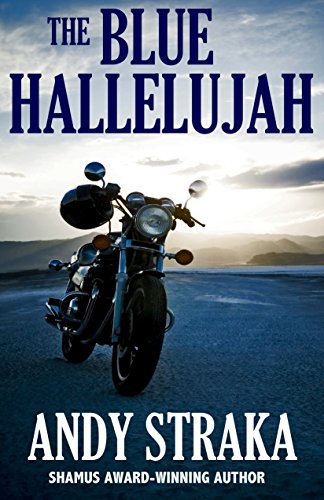 Another by Andy Straka, but this one is a stand-alone.

The hero of The Blue Hallelujah is Jerry Strickland, an old cop with a bad heart, pretty much just waiting to die. The heart – and the faith – have gone out of him since the death of his wife Rebecca, who died in prison, having killed a serial killer/rapist.

But he has a few miles left in him, as he discovers when he gets word that his granddaughter has been kidnapped. His status as a retired detective buys him some slack from the police investigators to stick his nose in. And soon he becomes convinced that this abduction is no random crime. It directly relates to the crimes of the man Rebecca killed. And the key to the mystery lies in his own set of old police files.

This is my favorite of all the Andy Straka novels I’ve read, though I thought it had a couple weaknesses. Actually one weakness, because I think the second is only a possible misunderstanding.

The first problem is with strong language – or rather, its absence. When a character who’s not identified as a practicing religious believer says “What in the world’s going on here?” instead of something stronger, that’s morally good. But it weakens the story. It pulls the reader out of the narrative, making him ask, “Why did he put it that way? That doesn’t sound like him.” It’s a problem we’ve discussed often on this blog, and there’s no entirely satisfactory answer, in my view.

The second problem is a likely misperception of genre. This story starts out looking like a regular mystery story. But it develops into a Christian spiritual thriller, complete with visions and minor miracles. I have no objection to that (in fact I welcome it), but some readers may feel as if they’ve been blindsided.

For all that, the story reeled me in and held on to me, and I was in tears at the end. Wise, beautiful, and touching, The Blue Hallelujah gets my highest recommendation.