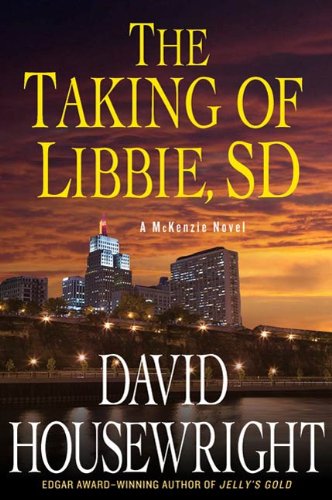 Big Joe was standing in front of me, making a large hole in the sunlight. He looked like the guy that Jack met at the top of the beanstalk.

Implausibility is not necessarily a defect in a detective mystery. If the author manipulates his characters skillfully enough, he can make them do things way, way outside their comfort zones. In fact, that’s kind of what plotting is all about.

The Taking of Libbie, SD begins with home invaders breaking into detective Rushmore “Mac” McKenzie’s St. Paul home, dumping him in the trunk of their car, and driving him to the small town of Libbie, South Dakota. After some discomfort and embarrassment, the town fathers finally admit that the thugs they hired kidnapped the wrong guy.

But how were they to know? How many Rushmore McKenzies could there be in the world? Especially at that particular address?

Finally Mac gets the story out of them. A man using his identity went to the town and persuaded the civic leaders that he was planning to invest in a big real estate project there. Many locals invested. Then one day both he and their money disappeared. The local “big man,” the town’s mover and shaker, hired some guys to kidnap McKenzie, and the cops went along with it.

It takes a fair amount of suspension of disbelief to convince the reader that it makes sense for Mac not only to forgive the kidnapping, but to agree to investigate. Before he’s done, some of the locals will wish he’d left the mystery alone.

The picture of small town life in The Taking of Libbie, SD isn’t bad. I can say that as a small town boy. The description of rural economic desperation rings true. The number of beautiful women living in the town is a major exaggeration in my experience, but author Housewright makes it a running joke in the book, which is probably the best way to handle that sort of thing. He also does a good job of motivating Mac to take on a case for people he has no reason to care about.

Cautions for language and adult themes. A pretty good job of selling a highly improbable plot.