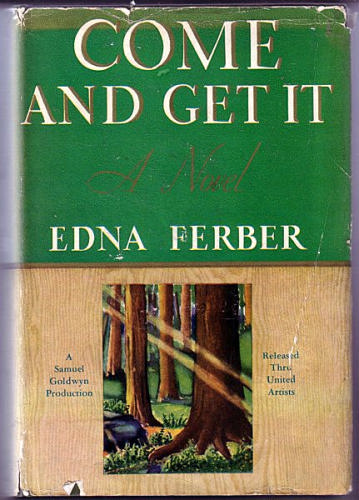 When I read We, the Drowned, which I reviewed the other day, I was making one of my attempts to connect with the lives of my ancestors, in that case my Danish forebears.

I’ve written before in this space about my mother’s mother’s family, who lived in Hurley, Wisconsin, generally considered the wickedest town in the north. So when I learned that a novel had been written (at least in part) about Hurley (renamed “Iron Ridge”) by an estimable American novelist, I had to read that too.

Come and Get It is one of Edna Ferber’s big American books. In novels like Showboat, So Big, and Cimarron, she attempted to capture the essence of her own country as expressed in the life of various regions. Come and Get It is her northern novel. It’s worth reading, though it hasn’t kept as well as its early fans hoped it would (it was even made into a movie with Edward Arnold, Walter Brennan, Joel McCrae, and Frances Farmer, but judging by the clips I’ve seen they made major alterations).

The central character of the novel is Barney Glasgow, the richest man in Wisconsin (even richer than the beer barons of Milwaukee). He started as a cook’s helper in a logging camp, worked himself up to expert logger status, went to work in a paper mill, and married the boss’s homely daughter, inheriting the business in time. He works hard and enjoys the toys his wealth can buy. He is force of nature, a genial pirate with the common touch. He actually dies shortly after the middle of the book, but his presence dominates everything that happens to the end.

The second half of the book is less exciting than the first, at last from a guy’s point of view. The focus turns to Lotta Lindbeck, the beautiful young granddaughter of his old lumberjack friend Swan Bostrom, who precipitates a mid-life crisis in Barney shortly before his death. Lotta marries Barney’s son, and we follow her life as she is rejected by Wisconsin society but becomes a sensation in New York, London, and Paris. The story carries on through the Gilded Age, World War I, and into the Great Depression.

It’s interesting to observe author Ferber’s attitude toward Barney, as a representative of his class. She’s very explicit that he cheated the government, making bogus homesteading claims, in order to acquire the great tracts of land which he then clear-cut. His friend Swan comments at one point that Barney could have secured a future for his heirs if he’d replanted the land instead of leaving it naked. Barney seems unable to grasp the point. The land was there. He came and got it. Let the future look to itself. But the author seems to admire his fire and his ambition, and most of the characters do too.

Ferber’s attitude toward America is also interesting. She writes (I think) as a Progessive, but her Progressivism has none of the anti-Americanism of the kind we know today. America is the future. America is where humanity’s problems will be solved. Why would anyone look to a burned-out culture like Europe’s, when America is bursting with energy and creativity and fresh ideas?

Not a great book, Come and Get It remains worth reading. And somewhere in the background of the crowd scenes, my ancestors are toiling, scrapping, and getting drunk.

9 thoughts on “Come and Get It, by Edna Ferber”