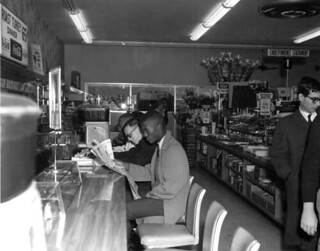 People have begun to publically worry that the world is forgetting what happened in Ferguson, Missouri over a month ago. I haven’t forgotten. I was praying for the families there this morning.

I could say many things about the Michael Brown shooting, how the police have handled it, how the community has handled it, the demonstrations, and the militarization of civil police forces. My perspective on these things has been stretched, and I don’t want ignore it. So let’s talk about “white privilege.”

You can see it in videos like this, showing a social experiment. A white guy tries to break into a car for thirty minutes, alarm blaring, without being questioned or stopped. A black guy does the same for less than five minutes before police show up. You have to assume witnesses believed the white guy had lost his keys (or something legit), but the black guy was obviously committing a crime. (Here’s a man’s reaction to the video, blaming blacks for legitimizing the stereotype they dislike.) I’m told the same kind of experiment has been tried with two men and a woman, each pushing a car up a street. Witnesses ignore the white man, question (or call police on) the black man, and offer to help the white woman.

In these cases, white privilege—no matter what the term may imply when pundits and professors use it—means being able to get on with your life without harassment, even when your car has broken down. Dr. Jarvis Williams describes other ways the term applies: getting a job or promotion, hailing a cab, or walking around a department store on your own merits, not being judged by the color of your skin. As a white man, I have never thought I could look suspicious while browsing a store, but that has been the experience of many respectable people who are judged regularly by their skin color. The absence of that public suspicion is what “white privilege” means.

Dennae Pierre is a white woman who married a black man eight years ago. In a post today, she describes a small part of how her perspective on being black in America has changed. “I may have been able to have deep discussions with my husband about race, but I hadn’t lived THAT intimately side by side with someone who was African American and really given them permission to give me all their unfiltered thoughts with no threat of judgment, just a desire to really understand.”

What will we understand if we truly listen? We’ll understand that many Americans come from a family or a community that has been beaten down one way or another for years. They know people who were denied a drink at an old-style department store. They remember seeing reasonable, intelligent neighbors or relatives abused by police who were supposed to be keeping the peace. They were told by their elders that they would have to work twice as hard as others just to appear to be pulling their own weight, that they were prejudged at a disadvantage.

Some of us may have experienced discrimination like this, but we didn’t attribute it to our white skin. We thought we were facing tough competition. Perhaps we blamed it on group politics. It’s a whole other level to have enough evidence to suspect, if not actually believe, the opposition we have faced is society-dominant racial discrimination. That’s a hurdle we can’t jump through personal exercise or study.

What can a young woman do about how police perceive her? [The following anecdote has been shown to be exaggerated.] Young actress Daniele Watts discovered how little she could do when she was cuffed and detained the other day on suspicion of being a prostitute. The evidence? She had been seen kissing her husband a few minutes prior. Why didn’t the cops approach him first?

It’s an ugly story, and you can see she takes it personally. “As I was sitting in the back of the police car, I remembered the countless times my father came home frustrated or humiliated by the cops when he had done nothing wrong. I felt his shame, his anger, and my own feelings of frustration for existing in a world where I have allowed myself to believe that ‘authority figures’ could control my BEING… my ability to BE!!!!!!!”

I gather she means her ability to be a black woman married to and publically affectionate with a white man. This isn’t something that goes away by ignoring it. It isn’t a minor incident in a young person’s life. It’s a defining moment, and the idea that such a moment is unthinkable for my wife is the definition of white privilege.

So what can be done? Let’s talk about it.

14 thoughts on “What Privileges Come From Being White?”