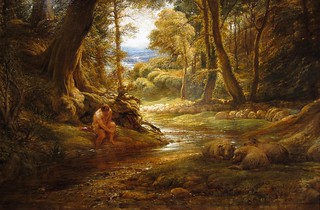 “I think the people who have influenced me most as a pastor,” Eugene Peterson said, “haven’t been the theologians – they’ve been the artists.” Jeffrey Overstreet interviewed Peterson for Seattle Pacific University back in 2011.

From artists I learned never to look at just the surface of a person, but to look for the interior life, to consider what I know of their past. An exterior is never just an exterior. In our culture, we’re trained to focus on the exterior, for instance, through advertising and publicity. Being present to a person long enough to start sensing that they’re never just themselves, they’re their parents, their grandparents, their kids, their neighbors – all of that becomes part of their story. Artists help me do that, because they are attuned to the interior life.

I think it’s interesting that Karl Barth, the theologian who has influenced me most, was mostly influenced by Mozart. Mozart was a theme in his life. I think he learned a lot about writing theology by listening to Mozart.