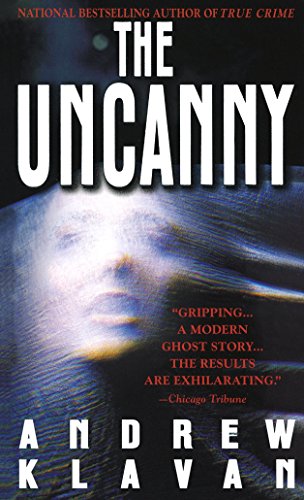 While reading Andrew Klavan’s autobiographical The Great Good Thing (which I reviewed a couple weeks ago) I was reminded of his novel The Uncanny, which I had enjoyed a great deal, though I understand that opinion isn’t universal. I thought I’d read and review it again, even though I’ve already reviewed it here.

The story is of Richard Storm, a Jewish American movie producer who has made a fortune doing horror films. After hearing shocking medical news, he has traveled to England to see the locations that inspired his love of the horror genre. There, while reading a story called “Black Annie” out loud at a Christmas party, he beholds – and falls in love with – an Englishwoman named Sophia Endering. Then she walks out of the house and out, apparently, of his life. But he will meet her again, as he assists an elderly English woman friend, Harper Albright, in chasing down the origins of the Black Annie story. That story shares elements with other legends and ballads, and inspired Richard’s own movies. The truth of the legend carries a threat with it, that of a monomaniacal cult leader with a macabre plan for the future of humanity.

On a second reading, I can see how some critics might find fault with The Uncanny. When I first read this book, I marveled at how the various story elements clicked together to set up an inexorable climax. But some might find that plot choreography implausible, as depending too much on coincidence. I think the coincidences are just the point. “The Uncanny” of the title is more than a feeling or a setting – it’s a force operating in the world. Klavan wrote the book as he was beginning to recognize the real existence of the supernatural. It may be that people resistant to that idea might find The Uncanny unpalatable.

Anyway, I liked it a lot. Cautions for language and sexual situations.

(As an added note, information Klavan has provided in his blog posts indicates that the Harper Albright character was based on a real woman he knew, who was an aunt of the actress Olivia Wilde.)

2 thoughts on “Re-review: ‘The Uncanny,’ by Andrew Klavan”