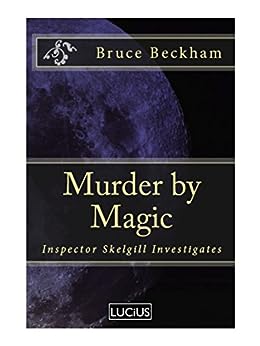 I’m liking Bruce Beckham’s Inspector Skelgill series better and better as the novels go on. However, there’s one problem with Murder by Magic that means I’ll have to include in this review a warning for our readers.

This time around, Inspector Skelgill of the Midlands CID grows curious about a spate of sheep mutilations in the Lake District. Then he and his team look into the disappearance of an eastern European tourist, who seems to have disappeared on an extensive estate recently purchased a foreign scholar.

The inquiry leads to human trafficking, a black magic coven, and a violent climax in which Skelgill shows considerable personal courage, and even (surprisingly) a modicum of consideration for one of his sergeants, Sergeant Leyton, a Cockney he tends to run roughshod over. It’s less surprising that he takes care of his female sergeant, Sergeant Jones, an attractive woman he’s been flirting with passively throughout the series.

My problem with the story is a theological one. It’s pretty much impossible nowadays to write a story with evil black witches, I guess, unless you throw in a good white witch to prove you’re not a Salem Puritan. So here we have an attractive, wise, and helpful white witch who provides material assistance to the inquiry.

No mention of Christian spiritual teachings about magic are in evidence.

I suppose author Beckham had no choice. The story as a whole was good enough – the best in the series so far, I think – that I’ll probably read more, even in spite of the detour into the occult.

I suppose that means I’m getting old and soft.

Otherwise, recommended. The violence is not graphic, and the bad language is masked with circumlocutions, some of them pretty creative. Beckham also excels at descriptions of nature, which will be a special draw for certain readers.