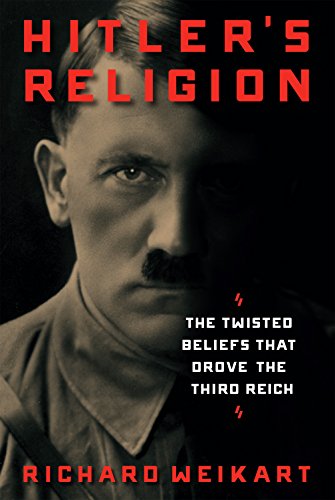 It still amazes me that some people actually believe the public religious image that Hitler created for himself, as if Hitler would never have stooped to deceiving anyone about such important matters.

If you’re in the mood to start an argument and lose some friends on Facebook, you can hardly choose a better topic than Hitler’s religion (or lack thereof). Hitler is the great hot potato of ideologues – whoever gets him in the toss tries to pass him on to somebody else as quickly as possible. Atheists like to declare that Hitler was a Christian, and Christians like to retort he was an atheist, or an occultist.

Richard Weikart, author of Hitler’s Religion, says they’re all wrong. He provides pretty convincing documentation that Hitler was in fact a pantheist. Hitler remained a member of the Catholic Church for political purposes, and appealed to God and the Creator in his public statements. But, like so many modern figures, he cherished very private, secret definitions of those terms.

In his personal conversations and monologues, and in non-public meetings, he was more frank. Christianity, he said, was a weak, corrupt religion. Jesus (whom he claimed to admire) was in truth an Aryan who fought against the greed of the Jews, and was martyred for it. The vile, Jewish, Apostle Paul then twisted Jesus’ simple teachings into a superstitious system that promoted degenerate Jewish ethics.

Hitler was not a systematic thinker, so his actual beliefs aren’t easy to pin down. But the preponderance of evidence in this exhaustively researched book argues that Hitler was most sympathetic to romantic Darwinism, the kind of veneration of the Life Force that George Bernard Shaw used to promote. In this kind of pantheism, Nature is conceived of as a universal force that exercises some kind of will. Nature’s divine will can be deduced by observing her laws, under which the strong always destroy the weak, permitting the species to evolve. Humanity is the pinnacle of animal life, and the Aryan race the pinnacle of humanity. To allow inferior races to dilute Aryan strength is thus a mortal sin against Nature’s law and purpose. So the inferior races must be eliminated. It seems cruel, but it’s the most virtuous choice in the long run.

The argument that Hitler was an occultist, so popular among sensational Christian writers, does not hold up, in Weikart’s view. Although there were occultist and heathen elements in the Nazi Party, Hitler sneered at them. He didn’t want gods of any sort. Only Nature – the Universe itself – aroused his veneration.

No doubt the argument will continue. There is disagreement about which sources are most reliable (Hitler’s acquaintances have less than stellar credibility), but Weikart documents his arguments exhaustively, gives his rationale for his source preferences, and presents a clear, compelling argument.