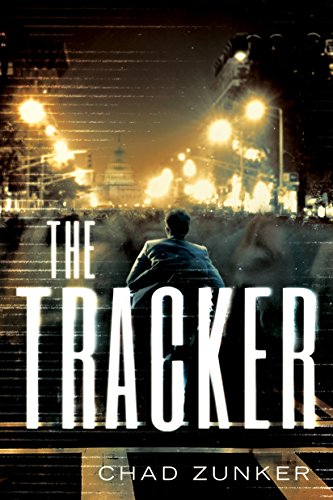 I’m going to go a little beyond giving this book a good review and a recommendation. I’m going to indulge in a little advocacy for The Tracker, by Chad Zunker.

Sam Callahan is 25 years old, almost finished with law school. He looks forward to a bright future that once seemed an impossible dream.

He takes a summer job as a “tracker.” Trackers are operatives for political campaigns. They’re the people who follow the opposition candidates around with their smart phones, recording everything so that every slip of the tongue and bad facial expression can be saved and shared.

He goes to a motel where (an anonymous tipster has informed him) the candidate he’s tracking is about to engage in some unacceptable behavior. What he sees is, first, a romantic tryst, and then a murder.

But the candidate has powerful backers, who falsify the evidence to make Sam into the suspect. Soon he’s on the run with the FBI on his heels.

Fortunately he’s not without resources. In his past he was a street kid, and in that life he acquired some useful skills – like breaking and entering, jacking cars, and picking pockets. He also has a hacker friend with high level abilities. And beyond that, he possesses a natural gift – situational awareness at an unusual level, allowing him to find ways of escape where others would be baffled.

The Tracker reminded me quite a bit of the last Gregg Hurwitz novel I reviewed, Trust No One. But that’s no criticism. When you’re doing a Hitchcockian “wrong man” thriller, where an innocent man becomes a fugitive, it’s a good move to give your hero a checkered past and some experience with extra-legal (or military) survival techniques. Stephen Hunter’s Point of Impact, one example among many, employs a similar approach.

Sam Callahan is an appealing hero – a guy with a rough past who’s turned his life around and is still learning how to give and receive love and trust. What makes the book particularly interesting to me – and probably to most of this blog’s readers – is that it contains openly Christian elements. It’s not a “message” book where everything works up to a conversion, but Christian characters speak the gospel in an open way.

The writing is good. The characters worked. Author Zunker hasn’t entirely polished his prose style (he falls into redundancies like “processing through” information, and “revert back”). But he has a feel for the craft, and I expect him to only get better. And he’s not bad now.