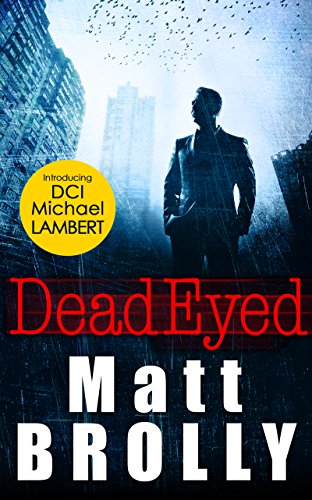 This one runs counter to the trend I observed (or thought I observed) a few days ago – that English mystery writing is tending toward rural and small town settings. Dead Eyed, by Matt Brolly, is a fully urban mystery, dividing its time between London and Bristol.

Michael Lambert is a London detective chief inspector. For several years he has been part of a secretive special division, but now he’s on compassionate leave following the death of his young daughter. He originally went into police work in the wake of the torture murder of a college friend, one of a series of such murders that remain unsolved.

Now, about 15 years later, another man is found murdered the same way – his eyes cut out of his head, and a Latin phrase meaning “The eyes are the windows of the soul” carved into his chest. Although he has no official standing, Michael pulls strings to be allowed to participate in the investigation. It’s not only a matter of closing a cold case; it’s perhaps an opportunity to exorcise some personal devils. The killer is extremely clever, always a step ahead of the investigators – and the murders are continuing.

Dead Eyed is an example of a book that was well done in many ways, but was clearly not for me – in the sense that the author doesn’t want people like me for readers. Author Brolly (what a perfect English name!) approaches the world from a very modern perspective. Abortion is morally neutral. Homosexuality is absolutely laudable. And religion is an aberration, a weird activity catering to a few weak-minded people, largely bigots.

The writing is good, the characters interesting, the dialogue professional. I thought the resolution of the book a little disappointing – the killer’s motivations are never really explained. But it’s a good novel, especially considered as a first novel. Recommended on its merits, but not really meant for Christians.