The other night, on a sudden whim, I went to YouTube and watched a film I’d only read about. It’s a 1935 English mystery called The Silent Passenger. It has the distinction of being the first cinematic depiction of Dorothy Sayers’ detective, Lord Peter Wimsey. Miss Sayers wrote the story especially for the film. Here it is, if you’re interested.

I’d heard bad things about this film, and it generally lived down to its reputation.

Actually, that’s kind of unfair. For its time and environment, it’s not a badly done film. It’s a clever, complicated story about blackmail and mixed-up luggage. It’s atmospheric, and the final showdown in the railroad repair facility is fairly exciting.

What’s wrong with it – and the reason Dorothy Sayers hated it – is the portrayal of Lord Peter. Peter Haddon, a well-respected actor of the day, seems appallingly miscast. He has a long nose – which is right – but otherwise he’s too tall and too dark – and kind of oily, like a gigolo. Instead of a monocle, he sports a repellant little mustache. And instead of playing Lord Peter as we love him – as an affected, amusing twit in the tradition of the Scarlet Pimpernel, he walks around with his mouth gaping open like the village idiot.

Still, it has its place in history. You might find it amusing. 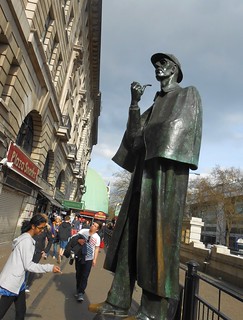 Martin Edwards follows his nose from one clue to another within The Detection Club, a London dinner society of British detective fiction writers such as Agatha Christie, Dorothy Sayers, and R. Austin Freeman.

Edwards crams many facts into this work, but his primary goal is “to refute the charge of ‘cozy’ that has hung over the Golden Age writers since a rebellious Englishman named Raymond Chandler moved to California and took to the pages of the Atlantic Monthly to denounce the whole project of British detective fiction in a famous 1944 essay called ‘The Simple Art of Murder.'”

Joseph Bottum concludes, “Of course, the actual argument of The Golden Age of Murder is almost beside the point. The book is too enjoyable, too enthusiastic, to live or die by the success of its thesis.” (via Prufrock)

I’ve been interested to read one of Margery Allingham’s Albert Campion books ever since I saw Peter Davidson’s portrayal on a BBC television series some years back. Books in the series have recently become available for Kindle at low prices, so I bought Police at the Funeral.

Albert Campion, the amateur detective of these books, bears a resemblance to Dorothy Sayer’s Lord Peter Wimsey, and it’s not by accident. Campion began as a parody of Lord Peter, but took on a life of his own. Nevertheless, they’re still alike enough to be brothers, except that Campion wears horn rimmed glasses instead of Wimsey’s monocle.

In Police at the Funeral, Campion goes to stay in a great house in Cambridge, at the request of a friend, and of his fiancee who is a lady’s companion there. The resident family is an eccentric and crotchety assortment of elderly siblings and cousins, all constantly quibbling and chafing under the iron rule of a formidable great-aunt. One of the residents has disappeared, and soon his body is discovered, bound with a rope and shot to death.

The story is perfectly a perfectly adequate example of the “cozy” English variety of mystery, but I found it less interesting than I hoped. Perhaps my tastes have been spoiled by the ugly realism of the modern mystery, or perhaps I just compared it unfairly to Dorothy Sayer’s books, which are (in my view) a notch brighter and more interesting.

Not bad, though. I’m sure many of our readers will enjoy it.