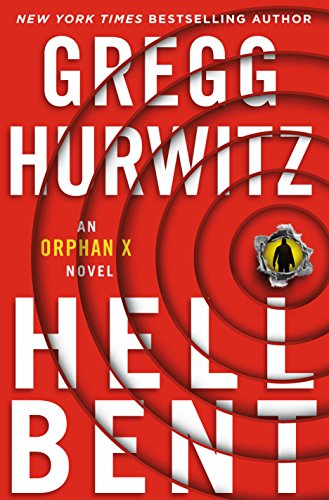 She felt like an anchor to him, not dragging him down but mooring him to this spot, to this moment, locking his location for once on the grid. For the first time in his life, he felt the tug as something not unpleasant but precious.

In the course of Jordan B. Peterson’s 12 Rules for Life, which I reviewed a few inches south of this location, he mentions that thriller writer Gregg Hurwitz is a friend of his. This reminded me to check on what Hurwitz has been doing lately. Lo and behold, he has a new Orphan X book out. I snatched it up greedily, and was richly rewarded. Hellbent is a humdinger, the best (in my opinion) of a superior series.

As you may or may not recall, Evan Smoak is Orphan X, the Nowhere Man. He was recruited out of a group home as a boy, to be part of the CIA’s ultra-secret Orphan Program. The Orphans, all people without families, were trained to be deadly assassins and commandos. Not only were their actions deniable by the government, their very existences were deniable.

Around the time Evan’s lifelong nemesis Van Sciver (Orphan Y) took control of the program, Evan managed to escape, with the help of Jack Johns, his mentor and surrogate father. Now, still with access to secret bank accounts, he lives a hidden life in a large LA apartment. His existence is spartan, his apartment almost empty of adornment. He spends his time helping people, but actual human relationships would give Van Sciver – who’s still searching for him – points of access, so Evan doesn’t have any.

But now Jack has asked him for a favor – to collect and protect a young woman in danger, Joey. Joey was scrubbed out of the Orphan program, but Van Sciver is still trying to hunt her down and kill her, along with another ex-Orphan and the boy he has been mentoring. In order to carry out Jack’s wishes, Evan will have to allow another human – and a pretty disorganized one – into his ordered life. And for him, that may take more courage than fighting a team of Orphans and Secret Service mercenaries, plus the MS Thirteen street gang (which he’ll also have to do).

Exciting, clever, and very moving in parts, Hellbent delighted me. I recommend it very highly. Cautions for language, violence, and mature themes.

Evan struggled to find the words. “For as long as I can remember, I’ve been out in the cold, nose up to the glass, looking in. I may not get to come inside…. But I’m sure as h*ll not gonna let the wolves in at everyone else. No. That’s one thing I’m good for.”

This is the second book in the Orphan X series by Gregg Hurwitz. In The Nowhere Man, Evan Smoak, former secret government assassin, present-day free-lance rescuer, continues his strange career. He saves people’s lives pro bono, generally by killing someone who can be stopped in no other way. But this book takes the story in a new direction. Someone very, very good at surveillance and special ops manages to capture him. It’s just business, as his captor has noticed Evan’s elaborate, high-security online financial activities. He wants Evan to transfer a large amount of money to him, on pain of torture. But he gradually realizes that Evan is a different kind of target than any he’s ever dealt with, and he decides to put his very life on auction.

I found the tension almost unbearably high in this one, as I’ve always found stories about imprisonment and escape emotionally difficult. Evan’s challenges rise to the level of the existential, as he comes to the end of his (considerable) personal resources, and reaches the point where he needs the help of others, something very hard for him to accept.

Once again, I found this Orphan X book riveting, and I highly admired the author’s skill at cranking up the tension while turning out superior prose. The depth of the characterization gives the book substantial weight. The plot is sometimes a little implausible, but we’re treading the borderline between novel and comic book here, so I just went with the ride. And an exciting one it was.

Cautions for language, violence, and adult situations. I also ought to mention that Evan practices transcendental meditation, which I don’t care for. But all in all, this is about as much quality entertainment for your book-buying dollar as you’re going to find anywhere.

I was surprised how much I enjoyed this book.

Evan Smoak, hero of Orphan X by Gregg Hurwitz, does not officially exist. As a young boy he was taken (voluntarily) from a group home for orphans, to join a secretive US intelligence team. Members of the Orphan Program are highly skilled agents and assassins, entirely deniable and expendable in case of capture. Evan was raised in near-isolation by his handler, Jake Johns, a good man who taught him not only tradecraft, but human values as well. He instilled in Evan his own Ten Commandments, rules of operation by which he has lived ever since.

But around the time he was thirty, Evan decided to come in from the cold. He left the program, at great personal cost. Now he’s a kind of freelance hero. When he helps someone out of a life-and-death situation, he tells them to give his phone number to one other person, and only one. This keeps his work from becoming overwhelming.

But when he gets a call from a woman in debt to the Las Vegas mob, whose father is being held hostage until she pays up, and then shortly after is contacted by another “client,” he knows his system has been compromised. Someone with skills similar to his own is hunting him. Who should he trust? How can he be sure who really needs his help?

And what should he do about his neighbor, a single mother, to whom he’s attracted? Particularly considering the fact that she works in the District Attorney’s office?

Gradually, he starts to break Jack’s Ten Commandments, one after another.

One can’t help thinking of a cross between Jason Bourne and Batman here. But Orphan X digs deeper, uncovering layers of dysfunction and contradiction in the personality of a man who lives to do good, but doesn’t know how to relate to other human beings. When I was a kid, I used to watch TV Westerns, in which the heroes often seemed to travel from place to place with no other occupation than Righting Wrongs. When I got older, I began to wonder how they paid the bills (for the record, The Lone Ranger, at least, owned a silver mine). But there’s a deeper question – where does the hero go to meet his own emotional needs? Is he really a good man if he doesn’t dare – or know how – to love?

Orphan X is the first book of a series that I eagerly anticipate following. There’s one sequel to date, which I’ll review soon. Aside from the exciting (sometimes improbable) plot and vivid characters, the writing here is top notch. Cautions for language, violence, and mature themes. Highly recommended otherwise.