Author Tom Wolfe,  “probably the most skillful writer in America” according to William F. Buckley, died yesterday at age 88.

“Whether profiling One Flew Over the Cuckoo’s Nest author Ken Kesey and his hippie pals the Merry Pranksters or America’s first astronauts, Wolfe had a dramatist’s gift for the telling detail and for crafting page-turning suspense,” writes Rolling Stone’s Tim Grierson.

“Never try to fit in; it’s sheer folly,” he once advised. “Be an odd, eccentric character. People will volunteer information to you.”

Wolfe had a style bound to inspire countless bad imitations. You may see some on the socials this week and next.

Terry Teachout writes, “I confess to being shaken by the news of Wolfe’s death. I last saw him in the flesh a year or so ago, and he looked at once frail and somehow ageless. I couldn’t imagine a world without him then. I still can’t.“

Dave Lull sent me a link to this recent Boston Globe column by Jeff Jacoby. It includes a section on the Oxford comma debate, in which he cites the late D. Keith Mano:

The story reminded me of one of those great exchanges that for years made William F. Buckley’s “Notes & Asides” — the column in which he regularly reproduced his exchanges with colleagues, readers, and other correspondents — the best part of National Review. From December 1972:

Among the responses was this lament from D. Keith Mano, a National Review columnist, to the magazine’s managing editor, Buckley’s sister Priscilla:

“I have read with dismay WFB’s ukase on the serial comma. I can’t do it. No way. It’s just plain ugly. WFB says this is un-negotiable. . . . How serious is he? Can I arrange a dispensation?

“Look: I’ll compromise. There should be peace in the family. Instead of “John went to the store and bought some apples, oranges, and bananas” — how about if he just buys oranges and bananas? Or a head of non-union lettuce. You see what this sort of restriction leads to. And they ask me why fiction is dying. Erich Segal, I bet, uses the serial comma.

“You may tell WFB that, from now on and as ordered, I salute the red and white.”

I’m frankly a little disappointed — I’ve been won over to the Oxford comma side, myself. I have the idea the Forces of History are in its favor. Perhaps that was Mano’s fate, to be a genius forever tainted by his associations with questionable movements. Playboy Magazine. Dropping the Oxford.

Of course, my advocacy of the O.C. probably dooms it…

“The ‘Benedict Option’ isn’t the only way for Christians to confront the reality of an increasingly hostile and secular culture,” Andrew Walker writes. A better approach could be called “the Buckley Option.”

If the Benedict Option is about developing a “thicker” Christian community that grows more deliberate about sustaining and catechizing itself, count me in. But if the only result of the Benedict Option is a more aesthetic and intellectual homeschooling movement, then I have concerns about its long-term viability. A Christianity that isn’t simultaneously attentive to both its own institutions and its public witness simply cannot fulfill the robust demands of orthodoxy.

The Buckley Option will sacrifice no space in the social or civil arena. It will believe, as the church always has, that its gospel brings with it good news for society, regardless of whether society believes its message is good or not.

[And it] will recognize that in a fallen world marked by self-interest, democracy is the preferred method for government order. While imperfect, it allows self-interest to be dealt with in the sphere of persuasion, not coercion. Eschewing theocracy, a Buckley Option approach will recognize that the moral ecology of any nation is dependent on a public morality, not a government morality. While the Benedict Option implies that democracy sowed the seeds of its own destruction, a Buckley Option approach recognizes that the seeds of destruction are not unique to any one political system. The moral breakdown that ensues when free people act freely is not caused by democracy, but by the besetting effects of sin that taint all human civilizations. 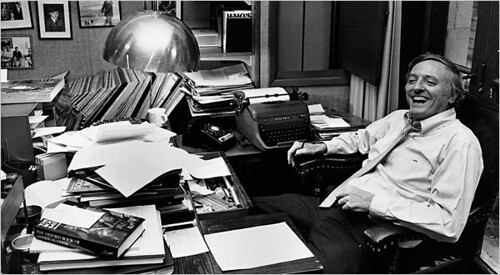