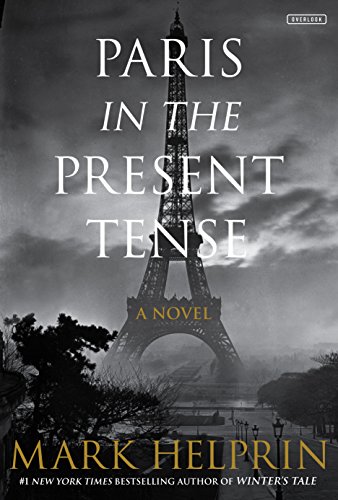 “Look,” he would say, “at home I have a stainless steel drain strainer, which when struck with a spoon produces a perfect, unclouded C with fifteen seconds of sustain. Were I younger I might be able to hear thirty seconds. The quality of beauty is implicit in my kitchen-sink strainer despite its uninspiring form and function – implicit in the steel, implicit in the form, and brought out by what? Accident? Perception? Illusion? Or perhaps by something greater, waiting to spring, that would sound, and sing, forever?”

A new Mark Helprin novel, as a rare an occurrence as that is, is always cause for celebration in my world. His latest is Paris In the Present Tense, a book, on the surface, about music. It’s essentially a caper story and a revenge story, though unlike any such that you’ve read before.

Our hero is Jules Lacour, seventy-five years old, a teacher of music at the Sorbonne. He is a Holocaust survivor, a veteran of the Algerian War, and a widower. A brilliant teacher, he has never advanced far in his career because he cares only for the music, not for fashionable theories.

Today he faces the prospect of seeing his only grandson die of cancer. Once, long ago, he was unable to save his parents’ lives. Now he will go to any length necessary to save this boy. Meanwhile, he kills two Arab boys one night, when he finds them trying to murder an orthodox Jew. The surviving assailant runs away shouting, “Racist!” which makes Jules the subject of a somewhat leisurely police investigation.

I won’t go into the plot any further, for fear of spoilers. The greatest pleasure here, as in all Helprin’s books, is in his digressions, the stories within the story, the flashbacks, the meditations, the long, baroque lists that render the narrative almost tactile.

Paris In the Present Tense is not my favorite of Helprin’s books, and parts of it are morally problematic. But Helprin doesn’t really need my approval, and Jules Lacour certainly doesn’t care about it. This is a rich, beautiful book with much to say to us about music, and about what music tells us about the nature of the universe. Social and political issues are addressed – especially the problem of resurgent antisemitism in France. But sops are thrown to the liberal side as well – a greedy corporation comes in for particular condemnation, and there are probably more sympathetic Muslim characters than strictly necessary.

4 thoughts on “‘Paris In the Present Tense,’ by Mark Helprin”