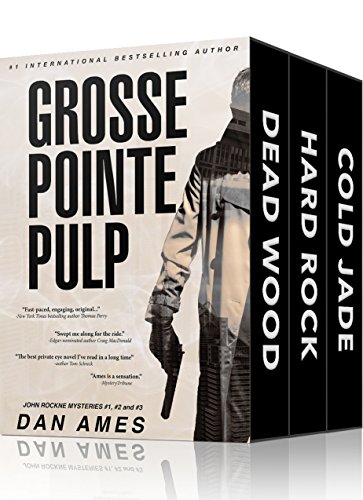 Sometimes there’s nothing much really wrong with a book except that it annoys me. That was my problem with Dead Wood, the first volume of the Grosse Pointe Pulp series, by Dan Ames.

The hero, John Rockne, was once a Grosse Pointe policeman – very briefly. Then one night he made a well-meaning decision that cost a man his life, and him his career. Today he’s a private investigator in the upscale Detroit suburb. He’s married and a father.

He gets a visit from a retired Country music star. The man’s daughter, a brilliant guitar maker, has been brutally murdered. The police blame a junkie who broke into her workshop, but the old man is sure it was his daughter’s boyfriend, whom he never liked.

John’s investigation leads him into the world of music recording, where the daggers in the back are not always metaphorical. He also comes face to face with a very old enemy.

This synopsis makes the story sound fairly grim, but in fact the tone is relatively light – which was one of the problems for me. John Rockne (who has a Norwegian name but never mentions being Norwegian, only one of the things I didn’t like about him) is a wiseacre. Now wiseacrey is a cherished tradition among hard-boiled private eyes. But you’ve got to earn the right to it, and John doesn’t (in my opinion). He’s not really hard-boiled. In fact, he’s kind of a wimp, constantly nagged by his wife and his older sister. He doesn’t show much sign of fighting ability – but nevertheless manages to survive, apparently mostly by luck, even when set upon by a pair of bodybuilders. In a related issue, he suffers from Fictional Transitory Injury Syndrome, the condition common to TV and movie heroes, where a guy suffers fairly serious injuries one day, and then seems entirely untroubled by them the day after.

On the plus side, I thought the prose wasn’t bad, and the ending of the book was quite affecting.

But, although this is a three-book set, I didn’t like Dead Wood enough to read the follow-up books. At least for now. Your mileage may deviate.