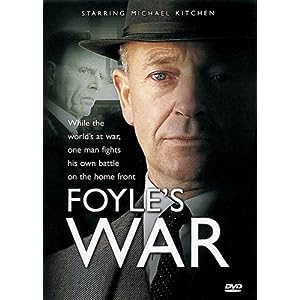 Since the Foyle’s War mystery series has been broadcast in this country on PBS, all of you probably enjoyed it long before I did. But in case I’m not the last person in America to catch this excellent program, I’ll give my own viewer’s response here.

Detective Chief Superintendent Christopher Foyle (splendidly underplayed by Michael Kitchen) is chief detective in Hastings, England, during World War II. A sort of running joke in the series is that he desperately wants to do something “more important” for the war effort, but again and again is denied the chance, sometimes because there’s a case he feels he needs to see through to the end, and sometimes because his stubborn integrity makes him enemies in high places. Later on, when the war is winding down, he just wants to retire, but keeps getting pulled back in.

Foyle is a smallish, unprepossessing man, but steely in his character. He’s the kind of superior officer who can flay a subordinate alive without raising his voice. Nevertheless he’s very popular with his underlings, and has a sly, dry, sense of humor.

He is assisted in his inquiries by two regular supporting characters—Samantha “Sam” Stuart, his military driver (played by an actress actually named Honeysuckle Weeks, who’s not conventionally pretty but is nevertheless entirely adorable), and Detective Sergeant Paul Milner (Anthony Howell), an early war casualty with an artificial leg. Together they investigate at least one murder each episode, often connected to war profiteering, espionage, and military secrets. Foyle isn’t always able to arrest the sometimes well-protected culprits, but he does all he can and never gives up under any pressure less than direct orders. In such cases, he never leaves the stage without laying out the moral case. END_OF_DOCUMENT_TOKEN_TO_BE_REPLACED

I was planning to post something about Occupied Norway today anyway (you’ll find it below), but it happens that one of Norway’s last living Resistance heroes died today. He was named Gunnar Sønsteby, and he was the most decorated man in Norwegian history. If you followed my advice and watched the movie, “Max Manus,” Sønsteby was one of the characters portrayed in it. But he could have carried a movie all on his own.

A while back, I posted a piece I called Survival Story. It concerned a strange character I discovered in a Norwegian-language book I read about my ancestral community, Kvalavåg, in Norway. During World War II, one of the German occupation officers who served there was a Jew named Konrad Grünbaum, who ended up in the Wehrmacht due to a clerical error.

One of the commenters on that post was an actual descendent of Grünbaum’s. He contacted me through Facebook and asked if I had any further information. I didn’t, but promised to check with my relatives over there.

And they came through, past all hope. As it happened, an article on Grünbaum had been published in the Haugesunds Avis newspaper back in 1986. The article was illustrated by a photo of part of Kvalavåg which Grünbaum took during the war. Because of that, my relatives kept a couple copies, and they were happy to send one to me. I have forwarded it to my correspondent, and it’s on its way to him by mail.

My translation of the article can be read below:

Konrad Grünbaum, a Jew by birth, is now 70 years old and a retired city council member in Fürth. He lived in that city before the war as well. He was a metal worker in a factory, and an active member of the SAJ: The Socialist Labor Youth. END_OF_DOCUMENT_TOKEN_TO_BE_REPLACED